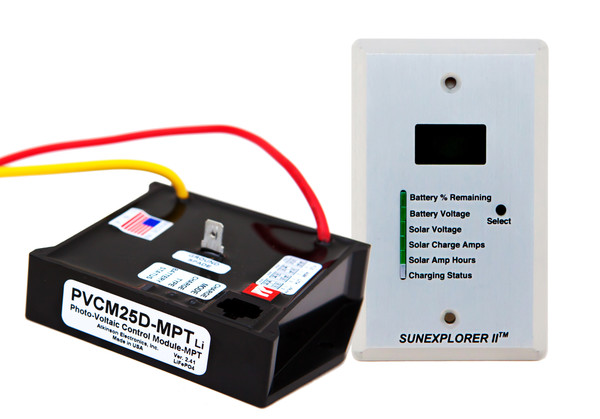 SKU:
A0454
Availability:
Products will usually ship with-in 3 business days from order. For larger quantities or expedited orders, please call. If you are shipping to a different country than the US, expect additional fees from the carriers when delivered.
Weight:
9.00 Ounces
PVCM25-MPTLi Amp Charge Controller Kit with Display:
Product Sheet

The PVCM25D-MPTLi charge controller is only compatible with the factory installed displays (SEDM4-25) and the SEDM6-25.

The 25 Amp solar charge module with Multi Point Tracking (MPT) controller (PVCM25D-MPTLi) is a rugged inline solar charge controller. It uses Pulse Width Modulation (PWM) to control the solar charge current. The controller delivers the maximum charging rates throughout each of the charging stages and connects between your 12VDC storage batteries. It is Ideal for RV’s, motor homes, trailers and off-grid applications such as small cabin sites. The charge controller is now programmed to use Lithium batteries along with Flooded Led Acid (wet) batteries(s), Lifeline AGM battery(s), and other brands of AGM battery(s).

The PVCM25D-MPTLi is fully encapsulated and can operate in the wide temperature ranges and harsh environments. It is a micro-processer based, solar charge controller with temperature compensation that is used for AGM, LiFePO4 or flooded batteries. It automatically charges your battery to 100% and keeps the battery in float stage. If your battery gets to low, it goes into Automatic Boost Mode keeping your batteries full and extending the life of your batteries.

The SEDM6-25 is the display unit for the PVCM25D-MPTLi controller, It has a high quality brushed aluminum face plate and it displays the battery percent remaining and its associated LED. The display’s select button allows the user to turn on its back light, advance to the next display setting, reset the solar Amp hour accumulator, force the PVCM25D-MPT into a charge routine to top-off the battery(s) when controller is in float mode, lock the display on the current setting, or activate scroll mode.